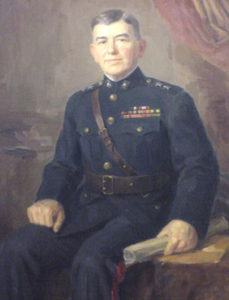 Chartered by the Grand Lodge of Virginia, the John A. Lejeune Lodge No. 350 of Ancient Free and Accepted Masons was established in Quantico, Virginia in February 1925.  The lodge is named in honor of Lieutenant General John Archer Lejeune, U.S. Marine Corps.  General Lejeune was an exemplary Marine having led combat forces in WWI, guided the establishment of schools at Quantico, and later served as the 13th Commandant of the Marine Corps.  After the war while still deployed, General Lejeune was made a Master Mason in a lodge in Coblenz, Germany and became a devoted member of our Masonic fraternity.

On July 2, 1924, twenty-four Masons signed a petition to the Grand Lodge of Virginia to grant a charter to establish Quantico Lodge No. 350.  On March 6, 1925, a Provisional Lodge was opened for the installation of the first officers.  Major General Lejeune, an attendee, was introduced by Most Worshipful (MW) Callahan, Grand Master of Masons in Virginia.  General Lejeune spoke about the characteristics of Freemasonry – tolerance, brotherly love, obedience to both human and Divine laws, and democracy.  The Bible used to open the Provisional Lodge was provided by Fredericksburg Lodge No. 4, the same Bible used by George Washington.  The first stated communication with the newly installed officers was held on March 11, 1925, during which both MW Callahan and General Lejeune were elected to honorary membership in the Lodge.

At the stated communication of July 20, 1927, the Lodge not having a permanent meeting place, Brother Zalanka recommended that the Marine Memorial Church in Quantico would be fitting and a building fund was established with members initially assessed $1.00 per month, and later raised to $10.00 per month for a period of five years.  Brother F.P. Moncure was authorized to consummate the purchase of the Marine Memorial M.E. Church as the permanent home for $5,000.00 and purchase the adjoining lots for $500 each.

The cornerstone of our Lodge was laid on June 4, 1934 in a ceremony led by the grand Master of Virginia, W.M. Brown.  The cornerstone contains many items to include the traditional vials of corn, wine, and oil, a Lodge roster, an 1816 copper penny; an Indian arrowhead; a civil war bullet, and a picture of the officers of this Lodge for 1934.  On May 24, 1940, the Lodge held a mortgage burning ceremony and a changed our By-Laws to re-set dues at 75 cents per month.

From the first petitioners on July 16, 1925, Earl J. Zalanka, James H. Spalding, Ernest W. Beck (the first raised to Master Mason in our Lodge), Thomas D. Collins, and Cyrus A. Gould, and the first Masons to affiliate with the Lodge, many Masons have called John A. Lejeune Lodge No. 350 as their Lodge.  Because of our unique location within Marine Corps Base Quantico, many notable Marines have also called John A. Lodge No. 350 their Lodge, these include:

But the affiliation of Marines with the Masonic fraternity is not without precedence.  Tun Tavern in Philadelphia, the birthplace of the Corps on 10 November 1775, was at the time an active Masonic Lodge with membership that included not only Benjamin Franklin but Samuel Nicholas, the first commissioned Marine Officer and the first Commandant of the Marines.

As the Masons of John A. Lejeune Lodge No. 350 reach our 100th anniversary as part of the Quantico community and as members of one of the world’s oldest Fraternities, we remain dedicated to the legacy of our namesake and the Masonic concepts of faith, hope, and charity.
We have arrived at the dawning of a new year, decade, and century. The advancing ages of our older members will not permit the Lodge to grow as deaths, demits, and suspensions will take their respective tolls on our membership. We MUST continue concerted efforts to locate, inform, and provide petitions to prospective men of good report; the future is up to YOU.